How can I protect against new tax increases & Biden Tax Plan?

A look at the massive tax changes expected during 2021 to go into effect in 2022. What’s in the Biden Tax Plan? New Estate Taxes or “Death Taxes” expected to increase dramatically. Strategies for 2021, the “Golden Year” to shelter against coming tax changes.

I pride myself on not being overly dramatic, and I try hard not to be political when I advise my clients. But I don’t think I’m overstating the case when I say that during the course of 2021 we will see a tidal wave of tax code changes—building to create a full-blown tsunami hitting in January of 2022.

I say January 2022 because it generally takes that long to implement tax increases—they’re just too complicated for the government to pull off before a January 1 start date. In addition, the government will not want to hit people with new taxes as we (hopefully) come out of the pandemic.

For anyone with significant assets, that gives you less than a year to protect yourself through advance planning and some highly pro-active legal steps. In fact, I’m calling 2021 the “Golden Year.” A once-in-a-lifetime opportunity to ensure that you, your family, and your heirs enjoy the full benefit of whatever golden egg you’ve managed to store away.

Not Just the “Wealthy” Should Take Action

What are “significant assets”? I’d say anyone with $2 million or more in net worth should seek advice immediately—and your net worth includes savings, investments, your home, rentals, commercial/industrial properties, art, IRAs, along with death benefits from life insurance or annuities…in short, everything.

Yes, $2 million in net worth isn’t that much these days, especially if you own a home in California, but it’s pretty certain that if the tax changes don’t hit you now, they’ll hit your estate hard when you pass away. It’s likely your estate will be worth much more in the future—but you need to take the action to protect it now.

If you own over $5 million in net assets, you’d better get to work fast.  A good place to begin would be a visit to our overview of Advanced Tax Planning for High Net-Worth Families.

California Already Being Hit by Tax Changes from the Election

In California, the tsunami that started building on election day may be especially overwhelming. Already with Prop 19, we’ve largely lost the right to pass on our Prop 13 tax assessment caps to our children. The coming changes will eat away at many other inheritance rights, and California tax codes will add a big additional multiplier to expected shifts in capital gains and other taxes.

This is not a political statement, it’s just the facts.

What We Know about the Joe Biden Tax Policy

What is Biden’s tax plan? As of this writing, we don’t yet know the exact shape of tax changes to come under the Biden Administration, but we know a lot. That’s because Joe Biden put out some pretty specific plans during his campaign, and the Democrats now effectively control both houses of Congress. The United States Treasury has also released its “Green Book” that details some of the current administration’s tax plan.

Importantly, federal law does not require more than a simple majority in the two houses to raise taxes – only to lower them. So Vice President Kamala Harris’s tie-breaking vote in the Senate will undoubtedly be enough to enable Biden raising taxes.

I am also not being political when I say that the goal of these changes will be the redistribution of wealth. If you are a Democrat, I hope you are not offended by that statement. We certainly do have a massive inequality of wealth in this nation, and I expect the discussion to be pretty direct on the subject. In the early Seventies, the marginal rate for Federal Estate Tax was a whopping 77%, and the stated purpose in the Internal Revenue documents was, and still is, to redistribute wealth.

Underlying much of the coming change over the next few years will be the prevailing, “modern” monetary theory, often called The Magic Money Tree. Under this theory, which appears to be supported by the new Treasury Secretary Janet Yellen along with other key players, the government can effectively print money to stimulate the economy without triggering too much inflation—as long as it pulls the froth off the economy with higher taxes.

The result, in theory, is not just stimulus without inflation, but wealth redistribution over time. If that sounds too much like magic—well, we may find out soon.

Specific Changes to Expect in the Tax Code

Let’s do a quick rundown of specific, expected tax changes from the Biden Administration, starting with the most dramatic. Then we’ll talk about what you can do to protect yourself in advance.

Limiting the Step-Up Basis would greatly increase the amount of federal tax income and state tax income. It could also mean that you would have to pay for all of the unrealized capital gains over $1M during your parent’s lifetime, even though those gains happened before you owned the asset—and even though you have not yet liquidated the asset.

Biden’s plan would also force realization of these gains whenever a property is gifted during a lifetime! That would be a radical departure from current law.

For any family that owns a home, owns stock, owns property—or anything that increases in value over time—the result for the family could be catastrophic at the time of death. Indeed, it might mean that an heir would be forced to immediately sell an asset in order to pay the retroactive tax.

Could this change occur during 2021 and go into effect in 2022? Because of the balance in the legislature, it’s entirely possible. The impact might be greatest on widows and widowers who would no longer be able to sell a house after a spouse’s death tax-free, or if they don’t sell, start a depreciation. Canada has no Step-Up Basis at death, and it has a vast impact on transfer of wealth.

For a high net-worth family, the proposed taxes and the long-term impact on multi-generational wealth would be profound. Here’s a breakdown from the Tax Foundation, who took a look at a family with $100 million in assets.

To be clear, you wouldn’t have to have $100 million to see a result like this. You could have just $5 million. We’re just using 100 because it’s easy to see the math. In this model, for simplicity’s sake, we’re assuming a $100 million capital gain during your lifetime.

When you die, the reality could look like this for your heirs, once the impact of new estate and capital gains taxes are combined: 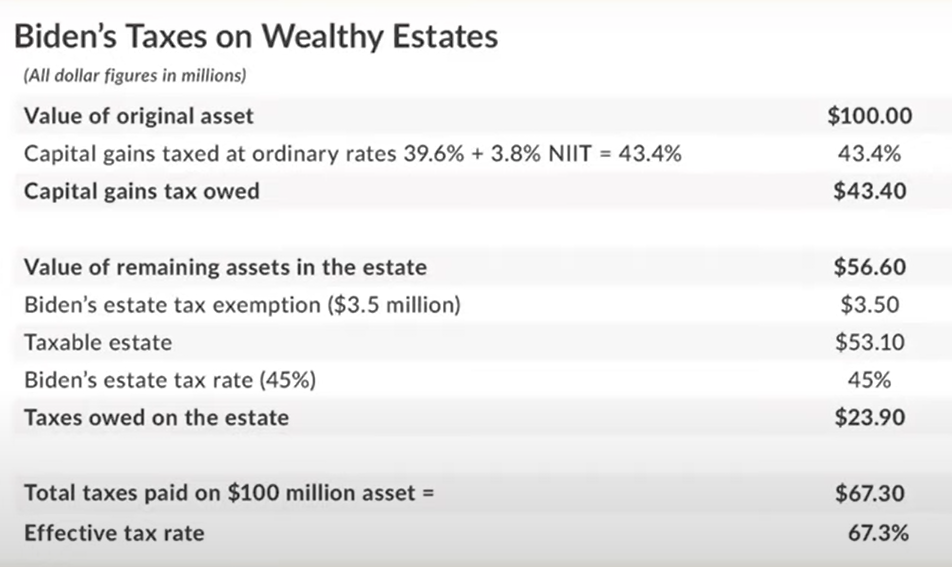 How Can I Protect Against New Biden Taxes?

As we’ve seen, under the new reality, a “wealthy” family may now have as little as $2 million in net assets including their home, savings, investments, insurance, and more. And under this new reality, these “wealthy” families need to start using some of the same strategies once used only by the very rich.

If you have $2 million assets now, the chance that you will have $3.5 million or more in assets when you die, and that your estate becomes subject to that projected 67.3% estate tax, is very high.

Only careful advance planning now can prevent that result.

This article cannot go into all the complexities of protecting your assets from new taxes. Every circumstance is different, and some strategies are open to some which are not open to others. That said, the general principle is simple, and high net-worth families have understood it for years: Retain control of assets while giving up ownership.

A mix of legal strategies for retaining control while giving up ownership might include:

Such strategies must be carefully established by a law firm with serious tax planning experience among high net-worth clients—as oftentimes, the true success of the plan is not tested until you yourself have passed away. You may wish to visit our own page detailing the tax-planning service we offer to families with more than $5 million in assets.

Most importantly, all these strategies must be executed well before you pass away, before the tax people come calling, and generally, before new legislation goes into effect.

In other words, act now.

Any strategy which involves the gifting of property must be executed especially quickly, because of a looming deadline that has nothing to do with the Biden tax plan.

On December 31, 2025 current death and gift tax laws change: gifts made within the three years before your death come back into your estate, and can be subject to a Death Tax.

As a practical result, that means you should make any substantial gift before the end of the day on December 31, 2022. Otherwise, if you die after January 1, 2026 the gift can come back into your estate with a lower exemption, and your strategies will have been for naught.

Does that mean you can wait until 2022 to get this done? I say no, because the Biden tax plans will likely go into effect in 2022, and it may be too late to do what you need to do.

In the shadow of this coming tsunami of change, I urge you to step back to take stock of your family’s challenges and opportunities. I also urge you to consult with a qualified attorney and tax planning specialist, not just a bookkeeper or CPA, about your options.

What Do We Do?

We have dynamic, creative lawyers based in offices throughout Norther and Southern California, and we offer in-person, phone, and Zoom appointments.  Please also consider joining one of our free online Estate Planning Webinars.

We invite you to book a consultation for Estate Planning, Trust Administration, Asset Protection, or Advanced Tax Planning using the form on this page, by calling us at +1 866.988.3956, or by requesting an appointment. 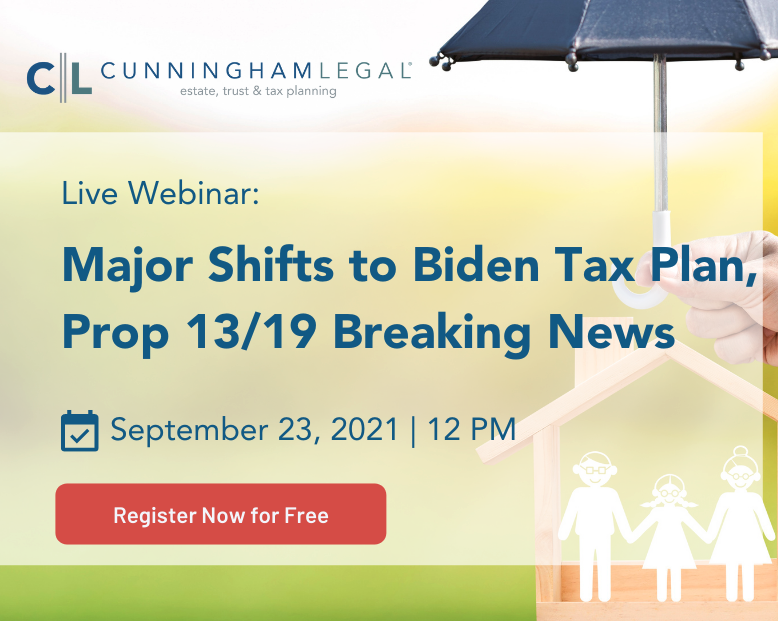 What are ‘significant assets’? I’d say anyone with $2 million or more in net worth should seek advice immediately—and your net worth includes savings, investments, your home…everything. 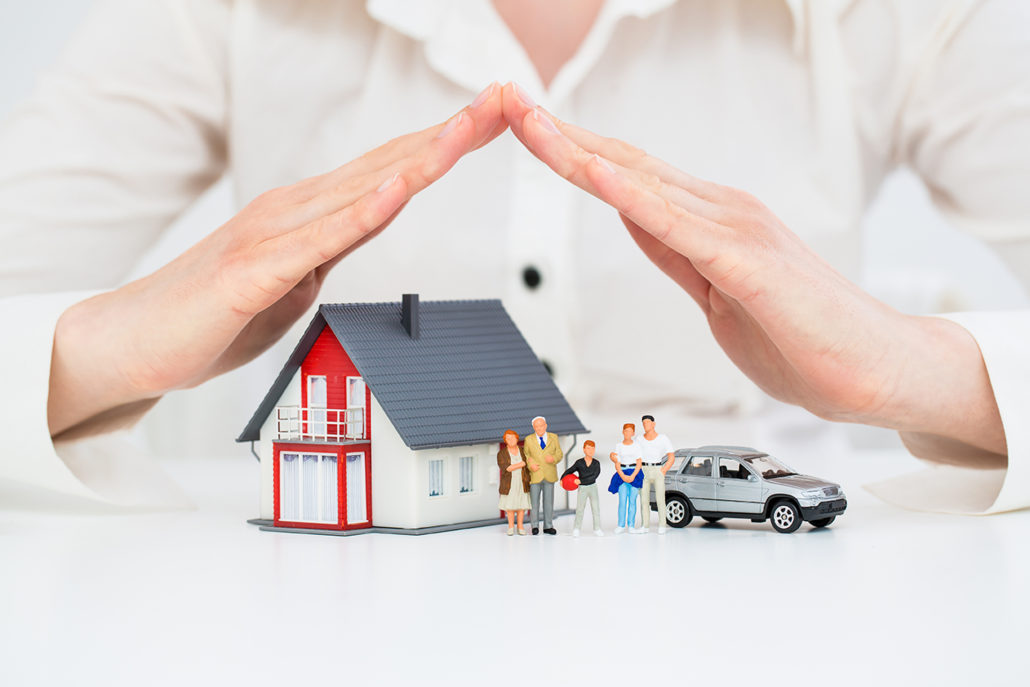